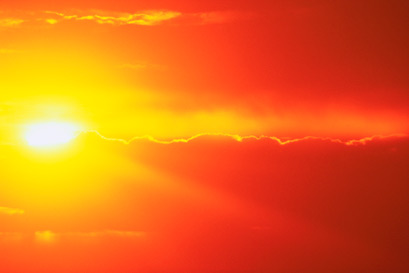 Our planet is an intriguing concoction of variables that meld together for successes spanning the organization of life (species, populations, communities, and ecosystems).  It is literally an evolutionary process that is ecologically driven.  And as a genotypic sex determined species, we seem to have an inherent fascination with the mysterious adaptive significance of environmental sex determination.  But the evolution of environmental conditions, such as temperature, determining the sex of offspring is not what is going to be explored at this time.  Nor do I plan to open up a heated discussion about climate change.

However, I am curious about the population dynamics of species exhibiting temperature-dependent sex determination in a warming world.  More specifically, how will sea turtle populations fare if sex ratios are dramatically skewed as a result of warmer temperatures.  Yet worry not as I am not alone in wondering about the stability of our threatened and endangered sea turtles.

Scientists from the Institute of Life Science, Institute of Environmental Sustainability and the National Marine Park of Zakynthos executed a study to determine if “temperature-dependent sex determination increases the probability of extirpation when ambient temperatures induce the production of offspring of a single sex.”  Especially when, “Some taxonomic groups, such as sea turtles, are already endangered and have sex ratios skewed to the sex produced at warmer temperatures (females).”

However, measuring population viability is more than just determining the ratio of male and female hatchlings.  Species stability requires a measurement of the number of males and females that are ready to mate at any one particular time (operational sex ratio), which also accounts for the breeding frequencies of each sex. 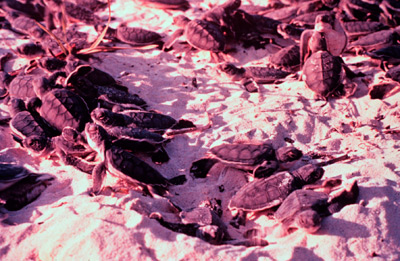 So just what does this data all mean?  Well, the most striking finding is that since male sea turtles breed more frequently than females (i.e. an operational sex ratio that is not female biased), they are able to “reduce the probability of unfertilized clutches.”  Even though males already comprise a smaller portion of the population, and would do so to a greater extent in a warming climate, the results are indicating that we (or they) do not have much to worry about when it comes to temperatures altering the sex ratios to a point where the population collapses.  But perhaps this just might be limited to the SHORT-TERM.

As pointed out by the authors, a male breeding cycle that is 2.6 times greater than females may help alleviate the impacts of climate change on the population, but there will undoubtedly be a reduction in males over time.  And as males become limited the probability that a population will persist declines.

For example, it is predicted that under some climate-change scenarios, nesting beaches in some parts of the world will produce only female hatchlings.  If this hatchling sex ratio propagates into adult sex ratios (e.g., there is no immigration of males from other sites), then the increased breeding frequency of males will be redundant because there will be no males.

Thus, we just may find ourselves taking on the role of the Earth’s climate by relying upon methods to control nest/embryonic temperatures in an attempt to artificially produce male hatchlings and ultimately prevent the loss of sea turtles.

0 0 0 0
Previous : Full of Life Those Anchialine Ponds
Next : Warning: BP has everything under control