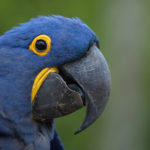 The striking, brilliant blue hyacinth macaw, like many other parrots in Central and South America, is facing an uphill battle. When combined with its naturally low reproductive rate, stressors related to habitat loss,  reduced growth of new forest, hunting, predation, disease, competition and the effects of climate change are putting the hyacinth macaw at further risk of decline, prompting the U.S. Fish and Wildlife Service  to propose protecting the bird as threatened under the Endangered Species Act (ESA).

At one time, hyacinth macaws were widely distributed, occupying large areas of Central Brazil, and smaller parts of Bolivia and Paraguay. Today, the species is limited to the Pará, Gerais, and Pantanal regions of Brazil. Native forests have been replaced by crops and cattle ranching, creating a shortage in nesting sites, increasing competition and resulting in a reduction in population size. The hyacinth macaw’s specialized diet makes it particularly vulnerable from the reduced availability of food resources resulting from habitat loss. In total, there are approximately 6,500 hyacinth macaws left in the wild.

While imports of parrots into the United States are already tightly controlled by the Wild Bird Conservation Act (WBCA), and the species is globally protected in trade by the Convention on International Trade in Endangered Species of Wild Fauna and Flora (CITES) – meaning the domestic pet trade is not a threat to the survival of the species in the wild – there is a demand for parrot feathers to be used in local crafts, which can contribute to declines, particularly in parts of Brazil where habitat conversion is also taking place.

In 2012, the Service proposed to list the hyacinth macaw as an endangered species. Based on new information, the Service finds that the overall rate of deforestation has decreased from the 2012 projections, and as such, the hyacinth’s risk of extinction is not as imminent as predicted. However, many of the threats mentioned above continue. As a result, the Service now proposes to list the species as threatened under the ESA.

In assessing the conservation needs of the hyacinth macaw, and in light of the protections provided to it under CITES and the WBCA, the Service is proposing to add the hyacinth macaw to an existing 4(d) rule for parrots that will allow the import and export of certain captive-bred hyacinth macaws and will allow domestic commercial activity across state lines to continue. While the 4(d) rule requires a permit under the ESA for “take” (including harming and harassing) of a covered species, “take” does not include generally accepted animal husbandry practices, breeding procedures or provisions of veterinary care that are not likely to result in injury to the species. Hence, adding the parrot to this rule will not impact those activities.

The ESA provides a critical safety net for fish, wildlife and plants and to date has prevented the extinction of hundreds of imperiled species, as well as promoting the recovery of many others. The Service is actively engaged with conservation partners and the public in the search for improved and innovative ways to conserve and recover imperiled species.

0 0 0 0
Previous : Billy Owl: Life as a burrowing owl #3
Next : The iconic giraffe is now threatened with extinction