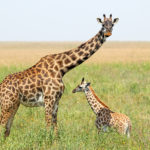 The iconic giraffe (Giraffa camelopardalis), one of the world’s most recognisable animals and the tallest land mammal, is now threatened with extinction. The species, which is widespread across southern and eastern Africa, with smaller isolated subpopulations in west and central Africa, has moved from Least Concern to Vulnerable due to a dramatic 36-40% decline from approximately 151,702-163,452 individuals in 1985 to 97,562 in 2015.

On December 8, 2016 the International Union of Concerned Scientists (IUCN) revealed a devastating decline for the giraffe, driven by habitat loss, civil unrest and illegal hunting. The global giraffe population has plummeted by up to 40% over the last 30 years, and the species has been listed as Vulnerable on the IUCN Red List.

“Whilst giraffes are commonly seen on safari, in the media and in zoos, people – including conservationists – are unaware that these majestic animals are undergoing a silent extinction. With a decline of almost 40% in the last three decades alone, the world’s tallest animal is under severe pressure in some of its core ranges across East, Central and West Africa. As one of the world’s most iconic animals, it is timely that we stick our neck out for the giraffe before it is too late,” says Julian Fennessy, co-chair of the IUCN SSC Giraffe and Okapi Specialist Group.

The growing human population is having a negative impact on many giraffe subpopulations. Illegal hunting, habitat loss and changes through expanding agriculture and mining, increasing human-wildlife conflict, and civil unrest are all pushing the species towards extinction. Of the nine subspecies of giraffe, three have increasing populations, whilst five have decreasing populations and one is stable.

“It is certainly a concern that iconic species like the loquacious African grey parrot (Endangered) and the giraffe, Giraffa camelopardalis (Vulnerable) are now listed as Threatened,” states Dr. Thomas Lacher, Jr. from Texas A&M University. “In addition, four wild relatives of the common mango are now Endangered and an additional wild relative Extinct in the Wild. The loss of genetic diversity in the wild relatives of many of our domestic food crops only erodes future options for new crop resources under changing climates.”