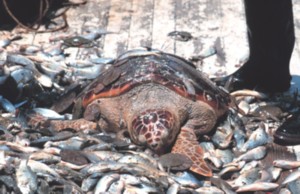 As the weather begins its annual warming trend, streams of aroma emanate from backyard barbecues droves of people clamor to beaches and coastal cities, and grocery stores, markets and restaurants tempt our appetites with a bounty of seafood choices. Most casual shoppers do not give a second thought to the origin of the seafood that fill the glass case, but are more concerned with the price and which sides best complement the dish. Whether it’s on sale or regular price, the seafood of you choice may have cost more than you think.

This hidden expense is not measured in dollars and cents, but is calculated in pounds of bycatch. Bycatch is the unintentional take of fish and marine life during commercial fishing operations. Unfortunately, the majority of bycatch, either dead, injured or in danger of dying, is thrown overboard. This waste of life not only includes the undesired sex, size or quality of the target species, but also includes dolphins, whales, sea turtles, birds and a variety of other sea inhabitants.

According to research (conducted at the Duke University Marine Laboratory and the University of St. Andrews in Scotland) submitted in June of 2003 to the International Whaling Commission, 308,000 cetaceans die annually as a result of fishing practices. This is nearly 850 whales, dolphins and porpoises that drown everyday when they become entangled in fishing gear.

Cetaceans are not the only victims of commercial fishing techniques. The endangered leatherback sea turtle is under threat from pelagic longline fishing practices. Scientists estimated in 2003 that there are less than 5,000 nesting female leatherbacks in the Pacific Ocean, down from 91,000 in 1980. Primarily used to catch swordfish and tuna, longlining vessels lay out 40 to 60 mile long lines of baited hooks. Unfortunately, this indiscriminant method tangles, catches and drowns sea turtles.

Pelagic longlining is not the only culprit as shrimp trawling produces 4 times as much bycatch as it does actual shrimp. This means for every 1 pound of shrimp, 4 pounds of marine life are discarded, in many cases dead or dying. These fishing methods are examples of a bigger problem of unsustainable fishing practices that flourish in the commercial fisheries market. To most of us the oceans represent an unlimited trove of natural resources. However, this misguided view and the popularity of many species is driving populations to extremely low levels. The healthy populations we once took for granted are now in harms way.

Realizing a need for action, governmental agencies and organizations have been experimenting with turtle excluder devices and other designs to limit incidental catch. However more action is needed including public support and awareness. As with any industry, sales drive the market, and in order for commercial fisheries to adopt conservation-minded harvesting techniques, responsible, concerned consumers must also adopt sustainable shopping techniques.