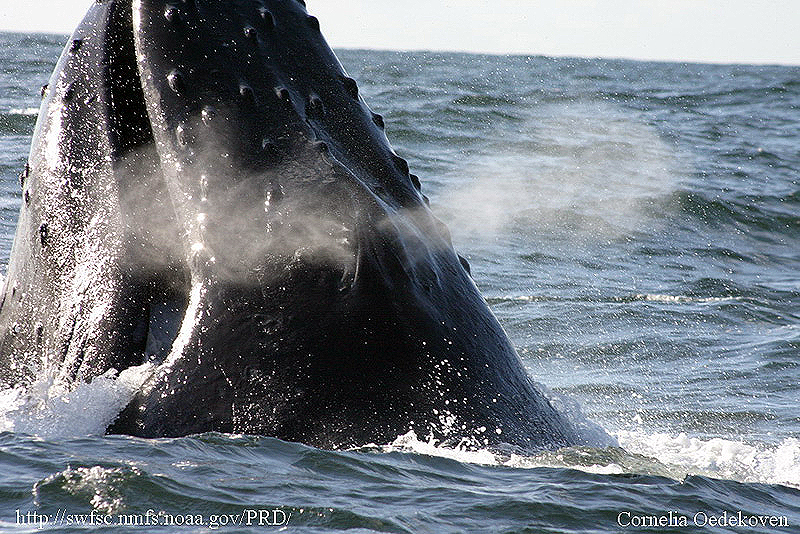 Severely depleted during the intense whaling periods of the 19th and early 20th centuries, the right whale, so duly named by whalers as a profitable species for their thick layer of blubber, oil yield, baleen, slow speed, surface dwelling behavior, and post-mortem floatability, is still, in the 21st century, hovering on the brink of extinction. In fact the North Atlantic right whale is the most endangered off American coasts.

Although most whaling practices have been surrendered to history, right whales are still under siege from commercial maritime operations. Ghost fishing, a term used to describe abandoned fishing gear adrift in our oceans, and other marine debris pose entanglement dangers to right whales and all species that rely on oceans for their survival. However, the most serious risk to the stability of the approximate 300 individuals that comprise the North Atlantic Right Whale population is ship collisions.

Migrating along the U.S. Atlantic coastline between foraging areas in the northeastern U.S. and Canada and breeding/calving areas in the southeastern U.S., right whales are instinctively drawn to waters laden with human activity and intense vessel traffic. The same attributes that attracted commercial whalers to right whales precludes them from avoiding oncoming ships. In addition, their dark skin and lack of dorsal fin make them difficult to see against the ocean waters.

Ship collisions are responsible for 35.5% of recorded right whale deaths between 1970 and 1999. The important point being that many ship strikes go unreported as large ships, such as containers, tankers, and cruise ships, may be completely unaware that their vessel has collided with a whale. According to NOAA, “It is also likely that ships of all sizes under no authority to report, in fact, do not, out of apathy or fear of enforcement consequences.”

The danger of overlapping migratory routes and shipping lanes is compounded by the ever increasing demand for timely cargo deliveries and tight schedules that leave little time for delays. Realizing that speed limits were vital to right whale rehabilitation, NOAA, in 2006, announced a Ship Strike Reduction Rule that would effectively create a 30-nautical-mile zone of protection in which ships would be required to reduce speeds to 10 nautical miles per hour during certain times of the year.

Unfortunately, the proposal was met with stark criticism from shipping companies that were concerned about the added costs associated with losing time. According to the Washington Post (August 26, 2008), “The Bush administration yesterday proposed scaling back protected zones for endangered whales in the Atlantic Ocean, yielding to cargo companies’ concerns about new speed limits for ships in these areas.”

Thus, NOAA revised their initial scientifically back plan calling for speed reduction buffer zones, and reduced the area of protection to 20 nautical miles. Unfortunately, the Administration’s decision for a reduction in the zone of protection is counterproductive to a species that has and continues to barely endure human commercial operations. Perhaps we need to revisit the Endangered Species Act of 1973 and look closely at the purpose of this legislation as we are again favoring economic growth and development over a species of immense esthetic, ecological, educational, historical, recreational, and scientific value to the Nation and its people.

0 0 0 0
Previous : The catch of the day may cost more than you think
Next : Rainforests are more than a hill of beans