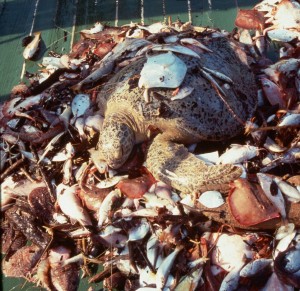 Sea turtle advocates in California and family shrimp fishers from Florida filed a federal lawsuit today against the U. S. State Department for violations of the Endangered Species Act (ESA) for allowing shrimp caught in ways that are deadly to sea turtles to be sold in the United States  The lawsuit filed by the Environmental Law Clinic at Stanford Law School (Palo Alto, CA) on behalf of Turtle Island Restoration Network (Forest Knolls, CA) and the Mayport Village Association (Mayport, FL) claims that the U. S. State Department has failed to properly evaluate and prevent harm to sea turtles from overseas shrimp fleets that sell shrimp to the United States under the ESA’s Turtle-Shrimp Law (Pub. L. 101-162 § 609). It was filed in the U. S. District Court, Northern District of California. See the complaint.

“This is not only a tragedy for sea turtles, which die by the tens of thousands in shrimp nets every year, but is unfair to the U.S. fishers who obey the law and must compete in the U.S. marketplace with shrimp imports,” said Todd Steiner, biologist and executive director of Turtle Island Restoration Network a non-profit organization dedicated to the conservation of sea turtles and their habitat.

“Our Mayport shrimpers are struggling to survive, while foreign fleets get a free pass on the law and flood the market with cheap shrimp,” said Al Millar, representing Mayport Village Civic Association and its small fleet of family shrimpers based in the historic village of Mayport, FL. See www.SaveMayportVillage.net. “We work hard to fish and protect sea turtles but don’t get a break from our own government.”

The lawsuit claims that the State Department has not properly enforced requirements for foreign shrimp vessels to use nets with Turtle Excluder Devices as U. S. fishers are required to do. The lawsuit asks that the foreign shrimp certification process be given additional environmental oversight and review. Recently, shrimp imports from Costa Rica were banned due to failure to protect sea turtles after environmentalists’ complaints, but 15 other nations were certified with little, if any, scrutiny.

“There is a simple, inexpensive, and elegant solution that allows sea turtles to escape drowning in shrimp nets, called a turtle excluder device or TED” said Deborah Sivas, Stanford Law professor, and director of the Environmental Law Clinic, who filed the lawsuit.  “If the State Department can create a reasonable certification program, we can save the lives of thousands of endangered sea turtles while allowing shrimp harvesting to continue.”

Americans consume over 500,000 tons of shrimp annually, and is the top fishery import of the United States, valued at over $3.9 billion last year, according to government figures. This includes trawl-caught wild shrimp and farmed shrimp (which does not capture sea turtles but is environmentally harmful due to pollution of fish ponds and land clearing). About 90 percent of shrimp eaten in the U. S. is imported. See latest U. S. shrimp import data.

Background:
The U. S. Turtle-Shrimp Law was challenged by nations at the World Trade Organization (WTO), claiming to be a violation of the “free-trade” agreement, leading to the famous “Battle of Seattle” protests in 1999 where thousands marched peacefully to protest weak environmental protections in the global trade treaty.  The U.S. Turtle-Shrimp Law was eventually found to comply with the WTO, but poor enforcement has allowed sea turtles around the world to drown in shrimp nets and slide toward extinction. (The movie Battle of Seattle starring Woody Harrelson that dramatized the protests was released in 2008). Read more .

On May 1, 2009, the Department of State certified, pursuant to Section 609 of Public Law 101-162 (”Section 609”), that 15 nations have adopted programs to reduce the incidental capture of sea turtles in their shrimp fisheries comparable to the program in effect in the United States. Belize, Colombia, Ecuador, El Salvador, Guatemala, Guyana, Honduras, Madagascar, Mexico, Nicaragua, Nigeria, Pakistan, Panama, Suriname, and Venezuela. The Department also certified that the fishing environments in 24 other countries and one economy, Hong Kong, do not pose a threat of the incidental taking of sea turtles protected under Section 609. Read more.

0 0 0 0
Previous : Endangered Birds Share Traits with Extinct Species
Next : Are We Ready to Head Off the Extinction Trend?