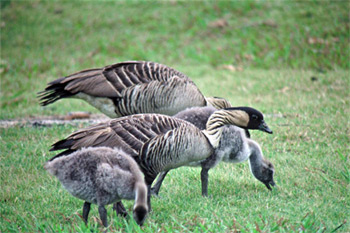 There’s an old adage that pops up all the time not just in reference to conservation, but in the subject area of “you name it.”  And for this very reason it has become quite ubiquitous.  It goes something like “Those who do not study history are doomed to repeat it” or some variation there in that I’m positive we’ve all  heard.  So when I come across a scientific publication that indicates endangered birds have many of the same ecological characteristics as historic extinct species, I wonder if we will learn from this data or shall I say past. 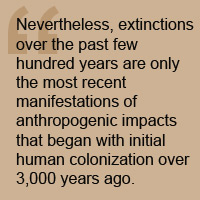 No surprise, but human globetrotting and colonization across the landmasses has corresponded to an increase in the extinction of members of the Animal Kingdom.  In fact, the nature of our discoveries and subsequent presence include three principal progressions that can drive the disappearance of native species:  1) overharvesting/overexploitation  2) habitat destruction/fragmentation  3) introduction of invasive species

“The extinction of birds in Oceania is considered one of the best substantiated rapid-extinction episodes in the vertebrate fossil record.”

Case in point, approximately 50% of Hawaiian land birds were driven to extinction upon settlement on the islands by Polynesians.  And to this day about 33% of all threatened birds are indigenous to the Pacific islands.

To link past extinction events with current avian vulnerability the authors developed a database of all known native land birds on 42 Pacific islands (497 species in all).  The database, in conjunction with extrinsic and  intrinsic ecological traits for each species, was then used to generate a classification tree to reflect the population-level extinctions over the last 3,500 years.  Intrinsic traits ranged from body mass, diet, species range, and nest location, etc. while extrinsic traits included invasive species and deforestation.

The results of the study found that the model “accurately predicted modern extinction risk [by comparing model results to current status on IUCN Red List] in approximately 84% of birds in the region.”  Additionally, the authors found –

“Four traits were particularly important in predicting ancient extinction. Flight ability was the most important, with 91% of flightless birds disappearing. Endemism was a secondary factor, with extinction of 50% of species or genera endemic to a single island, and large body size was also consistently associated with elevated extinction risk.”

“About one-third (448/1256) of the tropical Pacific island bird populations I considered here have been lost since human colonization. In the ancient extinction wave, 28% of populations (350/1217) were lost and 10% of the survivors (98/906) have disappeared in the past two centuries. In terms of species losses, 154 species disappeared before European contact and 28 more have gone extinct since then, leaving 296 extant species. Recorded extinctions represent a conservative estimate of the overall extinction severity because many extinct species may remain undetected.”

There is something to be learned from history.  And by looking at historical precedence we just might be on the cusp of a crystal ball telling us exactly which species are in need of special conservation attention… before extinction takes hold.