Last Saturday my wife and I made the 2 hour journey to the Monterey Bay Aquarium, which marks our first visit in about 4 years.  As with each and every time before, I left wondering why it took me so long to get back, and most importantly how can I swing a personal 28 foot tall kelp forest aquarium…OK I admit I’m a fish lover.  But the show was not only within the confines of the plexiglass walls as the wildlife visible from the outside amphitheater at the Great Tide Pool was amazing.

In the distance wrapped in kelp were approximately 9 sea otters. Kayaks would approach (all at a distance to prevent disturbance) and then wander away after a few minutes of enjoying the view.  Throw in a couple harbor seals, cormorants, murres, and sea lions and the bay becomes a picturesque wildlife refuge. 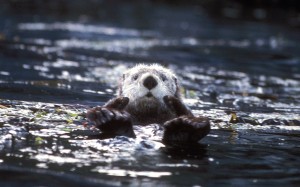 Interestingly enough though, on June 30th the U.S. Geological Survey reported a 3.8% drop in sea otter numbers during the 2009 census.  A decrease of 106 individuals may not seem like a terribly large decline overall, but it keeps them below the criteria needed to remove them from the Endangered Species Act (the 3-year running averages would have to exceed 3,090 for 3 continuous years), it represents a population growth plateau for the last three years, and according to Dr. Tim Tinker of the USGS,

“This year’s census results demonstrate that sea otters continue to experience levels of mortality sufficient to limit their recovery. This highlights the need for continued efforts to understand and mitigate threats to sea otters and other species in the nearshore ecosystem.”

A more in depth examination into the cause of the declining sea otter population trend was sought out by the San Francisco Chronicle.  In a July 1st article, it was reported that deceased otters have been testing positive for bacteria, viruses, and parasites often associated with sewage, urban, and farm runoff.  Thus, are we witnessing the first signs of a pollution problem along the California coast?

And what about overfishing?  Well an inadequate amount of available favored invertebrates may be limiting nutritional intake, resulting in otters that are more susceptible to diseases and preventing the population from reaching a healthy status.

Although there are currently more questions than answers, it would not be surprising to find that the southern sea otter of California is being hindered by a combination of multiple factors. 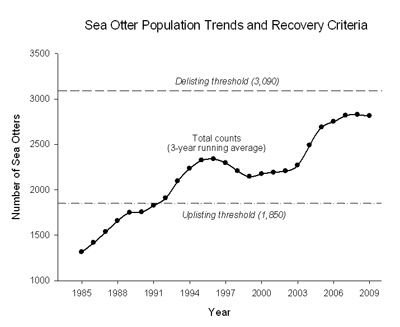 **USGS: To reduce the influence of anomalously high or low counts during any particular year, three-year running averages of the survey results are also used to assess whether the population is growing or declining. Factors that can influence the count include viewing conditions, abundance and species composition of surface canopy kelp, observer experience, and distribution and movements of the animals.