Who you gonna call? Raccoons! Well, that’s what a new study in Biological Conservation is suggesting in regards to threatened loggerhead turtles. Conservation plans typically call for raccoon management tactics as they are notorious sea turtle egg harvesters. At face value it makes sense to control sea turtle egg predation by keeping such nest raiders at bay, but researchers have actually found that lower instances of nest predation occur in areas where there are more raccoons.

It turns out that raccoons have a taste for ghost crabs in addition to turtle eggs, and by removing them from the ecosystem the natural balance of the food web is upset. A low population of raccoons leads to an increased population of ghost crabs, which ultimately results in higher turtle egg predation.

Besides the obvious point that over time nature has established a functioning system reliant upon biodiversity, it also attests to the notion that if the food web changes at a faster rate than the population, then the population may not be able to recover (i.e. extinction); effectively upsetting the sustainability of the lower systems that depend upon the more complex systems for survival. In this case raccoons, ghost crabs and sea turtles are important in each other’s continued existence. There is a cause and effect that flows both ways and the effects may or may not be seen immediately.

By rapidly altering the ecosystem and increasing the state/structural change faster than that at the population level, wildlife within the system are unable to cope. In order to have a long-term management plan for sea turtles, officials must work to ensure that the ecosystem remains intact and functional. Thus, short-term actions aimed at population recovery must be supported by ecosystem preservation plans that ensure support of the entire community, which by the way includes all the species that comprise the loggerhead’s food web. 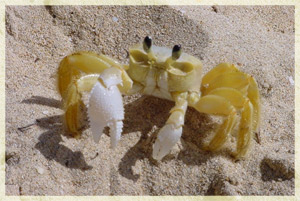 Wildlife management is a very intricate concept or process that is easily stated in the phrase “Protection of the ecosystem”, but is extremely difficult to implement when the complexities of wildlife populations, food webs, habitats, human presence, and politics are involved.