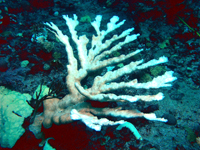 According to the Coral Reef Watch Program:

Scientists are concerned that bleaching may reach the same levels or exceed those recorded in 2005, the worst coral bleaching and disease year in Caribbean history. In parts of the eastern Caribbean, as much as 90 percent of corals bleached and over half of those died during that event.”

“Just like any climate forecast, local conditions and weather events can influence actual temperatures. However, we are quite concerned that high temperatures may threaten the health of coral reefs in the Caribbean this year,” said C. Mark Eakin, Ph.D., coordinator of NOAA’s Coral Reef Watch.

Prolonged coral bleaching of more than a week can lead to coral death and the subsequent loss of coral reef habitats for a range of marine life. It also affects local economies and tourism.

0 0 0 0
Previous : Burrowing owls in a den of iniquity
Next : Threatened with Extinction