This story has been in the news for quite some time and for some reason I kept it on the back burner. But, when the AP reported on June 4th that experts informed Congress that “A mysterious fungus attacking America’s bats could spread nationwide within years and represents the most serious threat to wildlife in a century ” I think it is definitely time to broach the topic.

To date it has killed between 500,000 to 1 million bats, mostly common species. But what has wildlife officials concerned is the fungus looks to be on the verge of entering the Southeast and Midwest, where some of the most endangered and largest populations of bats live. The fungus is known to occur in caves used by the Virginia big-eared bat, which has a population of only 20,000 (AP: Dina Cappiello,  June 4, 2009)

In general, fungi that cause wildlife diseases are present in the environment and gain nourishment directly from dead or decaying organic matter and are known as saprophytes.  However, saprophytes are opportunistic parasites in injured and/or weakened animals or in animals that have been exposed to the fungus via an unusual manner.  In White-Nose Syndrome affected bats, wildlife biologists have found fungal growths on the muzzles, ears and wings of hibernating populations, which appears to be a species of Geomyces that is a  terrestrial saprophytes that grows  at cold temperatures.

Thus, the question that wildlife officials are trying to determine is whether the fungus is the cause of the eradication of bat populations, or simply a secondary opportunistic infection resulting from debilitated individuals.

According to the FWS, “We have found sick, dying and dead bats in unprecedented numbers in and around caves and mines from Vermont to Virginia. In some hibernaculum, 90 to 100 percent of the bats are dying.”

Because bats fill a much needed role as pollinators and as consumers of night flying insects they are invaluable ecologically and economically.  Hence, the decline of bat populations through loss of caves and riverbank habitats, exposure to pesticides, human exploitation, and now a yet to be deciphered disease is an alarm that cannot be ignored.

“We are witnessing one of the most precipitous declines of wildlife in North America,” said Thomas Kunz, director of the Center for Ecology and Conservation Biology at Boston University, who said that between $10 million and $17 million is needed to launch a national research program into the fungus (AP: Dina Cappiello,  June 4, 2009). 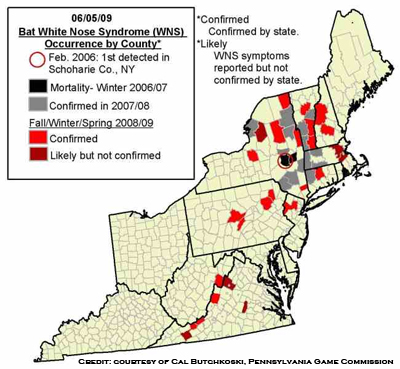 0 0 0 0
Previous : The Economics of Pollinators
Next : WATER by the Numbers