WATER by the Numbers 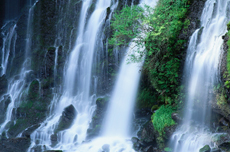 If you include ice, the proportion rises to more than four-fifths

Humans and most animals are ~62% water

Soft-bodied aquatic organisms like jellyfish are more than 98% water

The density of water is 1 kg per liter

Seawater has about 10.8 parts per thousand (ppt) of sodium and 19.35 ppt of chloride

Of all water on Earth, approximately 3% is fresh

One-fifth of freshwater lies under the surface as groundwater

0.3% of freshwater is in liquid form on the surface (rivers, lakes, streams, wetlands, etc.)

The ice covering the Antarctica landmass is more than 2.8 miles thick in some places

Water is most dense at 4°C

9,500 cubic miles of water evaporates from the oceans and falls on land per year