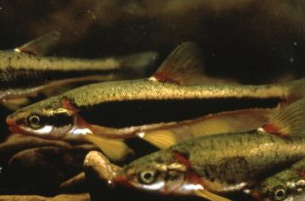 Any guesses as to what a violation of the Clean Water Act and Endangered Species Act goes for these days?  Well, according to a recent fine levied against Nami Resources Company, LLC (Nami) it is $25,000 for each violation.  And immediately I began wondering if a $50,000 fine was sufficient for discharging pollutants into a stream in Knox County, Kentucky that killed fish (Blackside dace) on the threatened species list as wells as “virtually all aquatic wildlife in a significant portion of the fork, including fish and invertebrates (USFWS Office of Law Enforcement).”

Nami, an oil and natural gas exploration and production company, pleaded guilty to dumping and failing to properly dispose of drilling and “fracing” fluids that were used during the establishment of the wells.

“Fracing fluids used at the Nami wells were unlawfully discharged into the upper reaches of Acorn Fork, contaminating narrow streamflows with hydrochloric acid and other chemicals.”

I don’t necessarily want to dwell on this particular case, but as I alluded to in the opening paragraph I am always skeptical on the monetary fines that companies routinely receive for violating environmental laws.  And if you see the writing on the wall, I am about to embark upon a rant that I may or may not have expressed via this forum previously.  However,  I’ll try and refrain from spouting environmental law and policy mumbo jumbo, as much as possible, to keep things rather brief and on point.

Since the early 1970s, the EPA has modified its environmental enforcement strategies on multiple occasions.  Skip ahead 20 years and the EPA began to explore new methods that were designed to “prevent pollution, to punish violations after they occurred, to harness market forces proactively, and to seek more partnerships with U.S. business that would advance designated environmental priorities.” (Environmental Law and Policy)

The evolution of environmental enforcement strategies is still under debate, still evolving and constantly striving to induce compliance and achieve their goals.  To reach these ambitions, the EPA utilizes administrative orders; civil actions for injunctions; penalties and other relief; criminal prosecutions; suspension; and debarment and listing.

But again I question a penalty that is in the thousands of dollars when corporate violators are routinely raking in millions.  It’s all about business and if it makes financial sense to comply with current environmental laws then compliance is exactly the road that will be taken.  But, when paying a fine for polluting is cheaper than properly disposing of hazardous materials it should be no surprise that we have violations of our environmental policies.  Because it is a classic case of cost benefit analysis, the ability to leverage fines must provide incentives for corporate compliance and as such the monetary value of these penalties must serve as deterrents to businesses contemplating illegal hazardous actions.  It just makes sense to me!

* Fracing involves injecting a fluid into subsurface rock at pressures high enough to fracture the rock and facilitate gas recovery. In some cases, acid-based fluids are used for fracing; they not only fracture the rock but dissolve more rock within the newly formed fractures, increasing potential gas flow from the well.