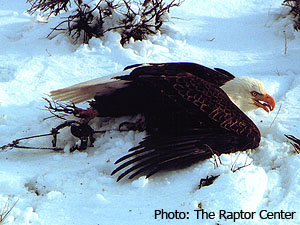 It’s not something that I tend to think about (nor would I want to) as indiscriminately catching animals with body-gripping traps seems like something that could only be witnessed with the aid of transportation designed by H.G. Wells.  But the fact remains that trapping is not limited to the pages of history and is actually occurring in what I thought were nature’s safe havens.

Coyotes, bobcats, otters, foxes, mink, raccoons, wolves, beaver, and other targeted species that reside within our National Wildlife Refuge System are feeling the intense pressure of steel jaw leg-hold traps clamping down on their limbs.  But the victims are not limited to those for which the traps were intended.  In what can only be described as terra firma bycatch, Bald eagles, Canada lynx, gray wolves and other endangered and threatened species are finding themselves at risk in our National Wildlife Refuges.

According to a survey conducted by the FWS in 1997, more than half (280) of all refuges allow trapping of wildlife with various traps including leghold traps, Conibear kill-traps and neck snares. Commercial and recreational trapping with leghold traps and strangulation neck snares was almost banned in 1999 when the House of Representatives voted 259-166 in favor of an amendment prohibiting such devices on the refuge system. But pro-trapping and fur-interest lobby groups pressured the Senate to kill the amendment by a 64-32 vote.

A national Decision Research public opinion poll showed that 79% of Americans believe trapping on National Wildlife Refuges should be prohibited, while 88% believe wildlife and habitat preservation should be the highest priority of the refuge system. Trappers, who compromise less than one tenth of 1% of the population, already have access to millions of acres of public and private lands outside the refuge system for their activities.

I think it is obvious that these cruel antiquated trapping practices should be put out of their misery, especially within sanctuaries that have been specifically set aside for wildlife preservation.  And that is exactly what a newly introduced piece of legislation is set to do.  H.R. 3710 (Refuge from Cruel Trapping Act) is designed to end the use of body-gripping traps in OUR National Wildlife Refuge System.  When 79% of Americans believe trapping should be prohibited on refuges we need to make sure our majority opinion is not only heard but understood by our Representatives.