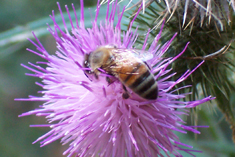 Honey bees pollinate approximately $15 Billion worth of crops in the U.S. each year

Over 75% of all flowering plants are pollinated by animals

Insects (bees, wasps, moths, butterflies, flies, beetles) are the most common pollinators, but as many as 1,500 species of vertebrates such as birds and mammals serve as pollinators, including hummingbirds, perching birds, flying foxes, fruit bats, possums, lemurs and even a lizard (gecko)

At least 3 bat, 5 birds, and 24 butterfly, skipper and moth, one beetle and one fly species in the United States that are federally listed as endangered under the Endangered Species Act of 1973, as amended, are pollinators. It is unknown how many of the listed plants require pollinators.