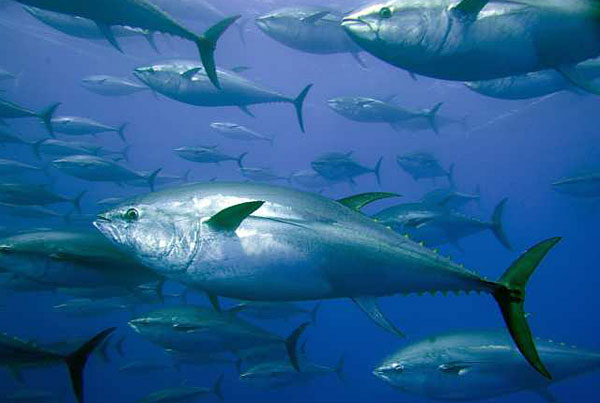 An organization that delegates [tries to] policy without any foreseeable recourse at their disposal is simply a Think Factory.  They ‘THINK’ they can get offenders to comply merely on the basis of suggestion.  Perhaps this tactic works in the world of science fiction when the wave of a Jedi’s hand is all that is needed to persuade the weak minded to act in accordance, but on this blue planet it’s the greenery that ‘s the driving force.

As per PhilBee’s recent comment  on the posted video “A Ban on Bluefin Tuna?”,

Therein lies the major problem with the whole system: if a country wants to catch a particular species, it knows it can do so without fear.  Japan’s done it for years with whales, and intends doing it with Atlantic bluefin tuna until stocks are gone.

When you combine short term philosophies with big profits now, we find ourselves constantly hovering on the brink of a catastrophe.  Yet we dismiss the blatant warning signs in an inane refusal to admit a problem is brewing because wallets continue to grow.  And this global trend of denial spans Wall Street, the housing market, whales, salmon, bluefin tuna, sharks, and the list goes on and on.  Are we so short sighted that we cannot make the historical connections?  The age old saying describing those who do not  learn from history are condemned to repeat it is not just a cleaver witticism is it?

Well, we again find ourselves nodding in shame that organizations designed to protect global resources have managed to fall short of garnering enough protections to ensure sustainability.  But, it is not the sole fault of the United Nations or the International Whaling Commission to eradicate the problem.  It is the consumer behind the iron mask that is completing the profitable circle, continuing to order fish species plagued by depleted stocks, and are thus responsible for contributing to the overharvesting problem .  Making responsible choices is of the utmost importance and is quite necessary for conservation.  And of course that does not let negligent industries, businesses, and nations off the hook who continue to practice and promote unsustainable fishing and poaching practices.

So what we end up with is a lack-of-action scenario that is aptly manifested by an AP quote in “UN rejects export ban on Atlantic bluefin tuna”:

“Let’s take science and throw it out the door,” said Susan Lieberman, director of international policy with the Pew Environment Group in Washington. “It’s pretty irresponsible of the governments to hear the science and ignore the science. Clearly, there was pressure from the fishing interests. The fish is too valuable for its own good.”

Those concerned for ocean conservation must continue to educate friends and family, spread the word, make responsible consumer choices, and continue advocating sustainability.   While we fight for better legislation and protections, it doesn’t hurt to hit them where it hurts…their pocket books.