A love for the ocean can be quite varied and in some instances inexplicable.  It is calming, extraordinary, deadly, mystical, full of life and truly deserves respect.  Honestly, I am not quite sure why I’m drawn to our marine ecosystems but my hypothesis is that it includes the previously mentioned adjectives as well as a hundred more that I could rattle off.  When you are hooked there is no turning back, ask any fish hobbyist; it’s an addiction.  And perhaps my first 10 gallon tank oh those many many years ago was the catalyst that sparked a lifelong love for all that is ocean.  Nirvana is breathing through a snorkel, watching fish, invertebrates, mammals, birds, reptiles and algae come together in perfect ecological balance.  I am an ocean lover! 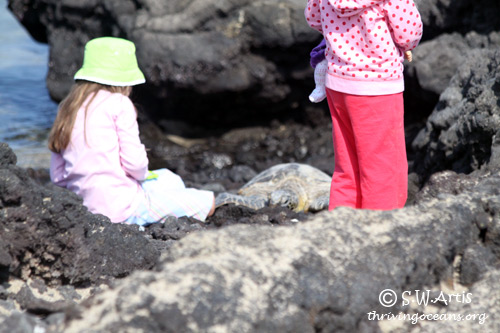 I am also a conservationist, a biologist by training, and by default an anthropologist.  I look through the eyes of common sense, which is governed by conservation and biology.  And I watch and study people as they interact with the marine world; hence I delve into amateur anthropology.  Watching wildlife can be amazing, but watching people can be just as insightful.  With that I must conclude conservation is an interesting thing;  you never know how it will materialize but as for when it is every day.

A beer can left on the beach, a plastic bag allowed to blow into the waves or a parent that urges children to approach and prod a resting sea turtle are perfect opportunities to impart conservation ideals.  Which by the way can often be accomplished by simply setting a good example.  A beachcomber collecting debris that has washed ashore, a snorkeler collecting bottles and cans while swimming the reef, and an individual capitalizing on situations to educate the next generation are a few easy but worthwhile endeavors. 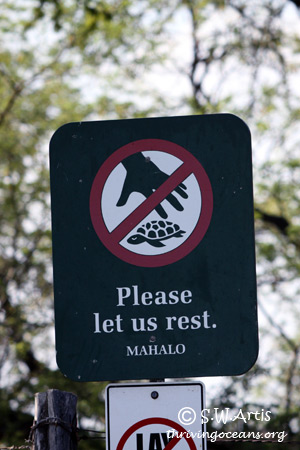 So just what is this all about?  Well a recent trip to the Big Island of Hawaii presented just such an opportunity as my wife and I wandered a beach along the Kohala coast.  We happened upon a green sea turtle that had pulled itself onto a beach made of lava rocks for a little rest in the morning sun.  As we captured a few snapshots from a distance (thanks to telephoto lenses!), a mother and her two children approached us and asked to see our sea turtle pictures.  After the exchange of a few words we pointed to the resting sea turtle…why look at pictures when actual observations can be made.  From a safe distance, the two girls watched the sleeping reptile as excitement filled their faces.  “Get closer,” the mother said softly, “it is OK as long as you don’t touch.”  As my wife and I exchanged glances the mother again urged the girls to get closer and closer.  After a moment of hesitation, the children heeded their mother’s wishes and were soon sitting next to the resting sea turtle.

To be honest I was a little shocked at the request, but awe set in rather rapidly as the older child began using her plastic magnifying glass as an exploratory tool in lieu of her fingers.  Sidestepping the do not touch command on a technicality.  I understand the actions of the child and no doubt would have probably done the same at her age as such investigations are essential in learning.  But I was left waiting for the mother to step in and provide some guidance, a little lesson in wildlife respect, a explanation of threatened species, anything.  Although there was a lack of action by the parent, I could not bypass this incredible sea turtle encounter to make a positive learning experience, suggest a safe viewing distance, and hopefully spread a few cool sea turtle facts that she regurgitates while sharing her photos during show and tell.

It’s all in the attitude and one can often move conservation mountains by being non-confrontational, friendly and informative; especially when children are involved.  As I said, one never knows how an opportunity to teach marine conservation will present itself, but when it does just make sure you don’t miss the chance to set a good example.

0 0 0 0
Previous : The Lords of the Desert
Next : Speaking out with bluefin tuna art