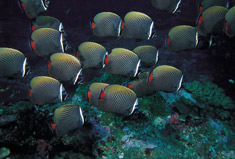 With frequent new discoveries, the number of valid scientific descriptions of species of fishes is always on the upswing.  Projections from 2006, self-described as conservative, put the eventual number  of living species to be close to 32,500.  Fishbase.org, updated in April 2009, has a searchable database of 31,200 species.