A little notoriety can’t hurt anyone as everyone strives for their 15 minutes of fame, right? On the other hand, Undaria pinnatifida is rather on the infamous side as its picture is filling wanted posters and putting ecologists on alert.  Already appearing on the IUCN’s 100 of the World’s Worst Invasive Alien Species and considered in the top 10 invasive seaweeds, Undaria has established itself somewhat locally to my home front in San Francisco.

The kelp (Undaria pinnatifida) is native to Japan where it is cultivated for human consumption. It is an opportunistic weed which spreads mainly by fouling ship hulls. It forms dense underwater forests, resulting in competition for light and space which may lead to the exclusion or displacement of native plant and animal species (Global Invasive Species Database).

As with many other invasive marine species, this exotic kelp is believed to have hitched a ride on ships, which has allowed it to establish itself from Southern California to Monterey.  According to a San Francisco Chronicle piece, “…the U.S. infestation, only on the Pacific Coast, had stopped its northern march at Monterey’s harbor. Crews pulled it out from the Monterey harbor every month for six years until funds ran out last year.” 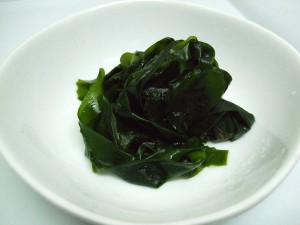 Perhaps the recent migration and sightings in San Francisco marinas is a direct result of halting of the Undaria culling program in Monterey.  As funds dried up to remove the invasive kelp from the marinas, it was allowed to grow unchecked while simultaneously releasing millions of spores. Plus, boats traveling from Monterey marinas to San Francisco marinas could potentially be a mode of transportation.

Additional theories include: harbors that are less polluted, boat paints that include fewer pesticides, and faster ocean going commercial vessels.