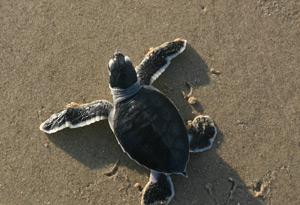 A new publication in Conservation Biology is shedding light on the effect of a low population on fertility success in sea turtles.  And unlike other species that experience reduced fertility when population densities drop, green sea turtles, loggerhead sea turtles, and their conservationists are receiving a bit of good news.

“We found that there has been no reduction in fertility in small nesting aggregations in either of these species worldwide.”

The well known issue of sea turtle overexploitation has sparked recovery efforts around the globe.  But the lingering question was whether some turtle populations have passed the point of no return and would thus be unable to ultimately avoid extinction.  According to researchers, marine species have had a variable success rate in recuperating from low numbers, which is a product of the biology of the species and human pressures like habitat degradation and harvesting.  However, these latest findings suggest that even populations comprised of very low densities have a chance at recovery (Previous critical density models indicated depensation might occur when populations dipped below 5% of historical numbers).

“Furthermore, there was clearly no pronounced reduction in fertility in either species at low numbers, even in rookeries yielding as few as 10 clutches per year.”

“The capacity to maintain functional levels of fertilization success in the face of high levels of exploitation may help in part to explain why total extirpations have been few and recoveries have been possible.  This information does not, however, explain why in some cases recovery has not occurred.”

I guess the biological moral of the story is that even highly reduced populations have an “intrinsic conservation value”, and can provide much needed information in sea turtle biology and aid in global recovery efforts. 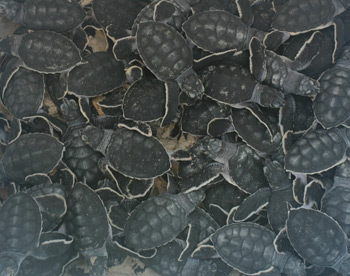 0 0 0 0
Previous : The cheaper sex and extinction…for Imperial Eagles
Next : Video: Ocean of Truth