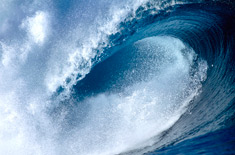 General stats quoted from the U.S. Commission on Ocean Policy’s Final Report: An Ocean Blueprint for the 21st Century:

In 2001, 23 percent of the nation’s estuarine areas were considered impaired for swimming, fishing, or supporting marine species.

In 2003, there were more than 18,000 days of closings and advisories at ocean and Great Lakes beaches, most due to the presence of bacteria associated with fecal contamination.

Across the globe, marine toxins afflict more than 90,000 people annually and are responsible for an  estimated 62 percent of all seafood related illnesses.

Experts estimate that 25 to 30 percent of the world’s major fish stocks are overexploited.

While coastal watershed counties comprise less than 25 percent of the land area in the United States, they are home to more than 52 percent of the total U.S. population.

On average, some 3,600 people a day are moving to coastal counties, suggesting that by 2015 coastal populations will reach a total of 165 million.

Approximately 80 percent of marine debris originates on land, either washed along in runoff, blown by winds, or intentionally dumped from shore, while 20 percent comes from offshore platforms and vessels, including fishing boats.

In 2000, the ocean economy contributed more than $117 billion to American prosperity and supported well over two million jobs.

Currently, about 30 percent of the nation’s oil supplies and 25 percent of its natural gas supplies are produced from offshore areas