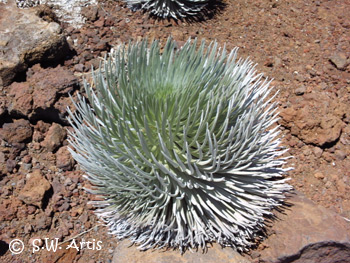 Heard of the threatened Haleakala Silversword; a species driven to the brink of extinction in the 1920s by goats, cattle and vandalism?  I wouldn’t blame you if you haven’t as this species is not a typical subject when one explores the list of threatened and endangered species.  To be honest, I only became aware of this threatened plant when I first ventured up the slopes of Haleakala volcano in 2005.  And it was during that first visit that I embarked upon an ill-fated descent into the cindercone, surrounded by a cinder desert landscape that is most definitely the closest thing to an extraterrestrial world that I have witnessed. 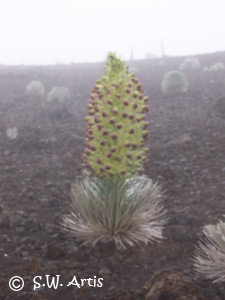 Perhaps ill-fated is a little harsh, but the story has become legendary in our family for a phrase I uttered in the midst of our ascent back to civilization while being pummeled by a rainstorm of biblical proportion: “This is the best day of my life!”    Wet, soaked and drenched are understatements and needless to say I was completely surprised our cameras survived the trek up the cindercone’s slope.

But even with the volcano’s poor reception of my inaugural visit, I did manage to make a return visit in June as I decided not to hold a grudge this time.  At any rate, I find nature to be quite resilient and the habitats in which life finds a small niche suitable for existence is always amazing.  Since I was feeling a need for island life today I thought it appropriate to share a little information on the Haleakala Silversword,  locally known as Ahinahina (Argyroxiphium sandwicense ssp. macrocephalum).

It is a distinctive, globe-shaped rosette plant with a dense covering of silver hairs. This monocarpic (flowers only once, at the end of its lifetime) plant matures from seed to its final stage in approximately 15 to 50 years. The plant remains a compact rosette until it sends up an erect, central flowering stalk, sets seed, and dies. Flowering occurs from June to September, with annual numbers of flowering plants varying dramatically from year to year.

The threats to this species are loss of pollinators caused by the nonnative Argentine ant (Iridomyrmex humilis) and yellow jackets (Vespula pennsylvanica); native seed-eating and herbivorous insects such as the tephritid fly (Trupanea cratericola); limited natural range, which makes it vulnerable to extinction due to catastrophic events, such as a natural disaster; competition from the nonnative plant species Verbascum thapsus (mullein); and human impacts (trampling and site degradation). Although goats (Capra hircus) and cattle (Bos taurus) have been removed from the park, they remain a potential threat. 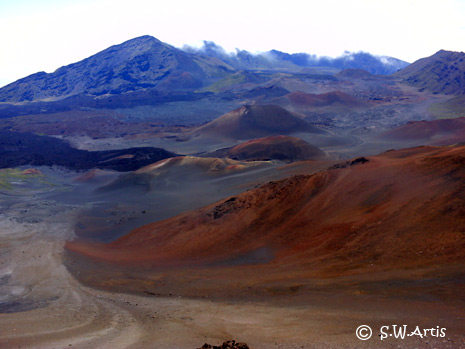