A Plethora of Black-Chinned Hummingbirds 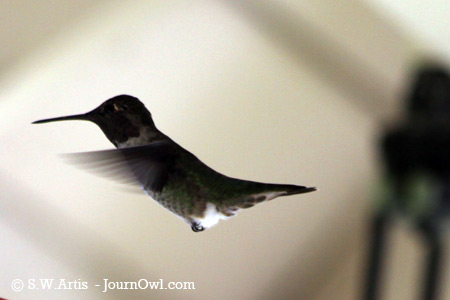 After posting a video comprised of consecutive digital photos of a black-chinned hummingbird in flight, I got in the mood for a little more nectar feeding action.  I’ve had these photos for a couple of  months now, but the activity at my parent’s home is still going strong.  It all began about 15 years ago with a single small feeder supplementing the diet of a few birds.  And as the word spread amongst the avian circle, the demand has mushroomed into an operation requiring up to eight 48oz capacity feeders and supports upwards of 40 or more hummingbirds;  the majority of which are black-chinned.  Of course the number of feeders is seasonally dependent as Fall and Winter usually witness a decline as the hummingbirds migrate.  But there are year-around residents too!  As it stands now in late October there are 3 feeders hanging from the patio roof, approximately 25 birds, and a need to prepare 5 quarts of nectar every other day. 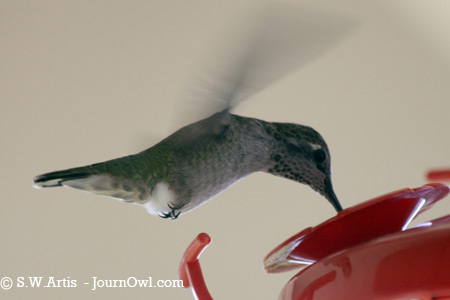 As one stands underneath or between the hanging feeders, it is literally abuzz with action.  Birds are zooming in and out looking for an open slot or grabbing a breather on some neighboring  roses.  Then there are the occasional rebels who test territorial boundaries by trying to steal a little time at the dominant male’s heavily guarded feeder.  It is quite humorous to see this particular feeder free from guests while all the other feeders are completely occupied as feathered bystanders hover in wait for their turn. 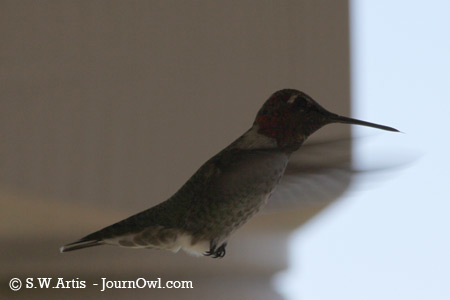 And the trait that stands out the most is their acrobatic flight.  They move forward, backward, up and down all with a change in the direction of their wingbeat.  Every position produces a different combination of thrust and lift.  And moving faster simply requires beating their wings in an increasingly vertical plane. 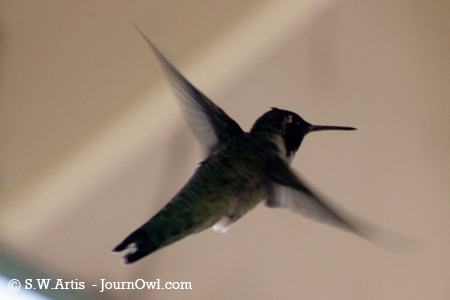 And the science behind their flying…

“In hovering flight the wings move backward and forward in a horizontal plane.  On the down (or forward) stroke the wing moves with the long leading edge forward, the feathers trailing upward to produce a small, positive angle of attack.  On the backstroke the leading edge rotates nearly a hundred and eighty degrees and moves backward, the underside of the feathers now uppermost and trailing the leading edge in such a way that the angle of attack varies from wing tip shoulder, producing substantial twist in the profile of the wing.”

With that said, enjoy the photos and perhaps I’ll grab some video next summer! 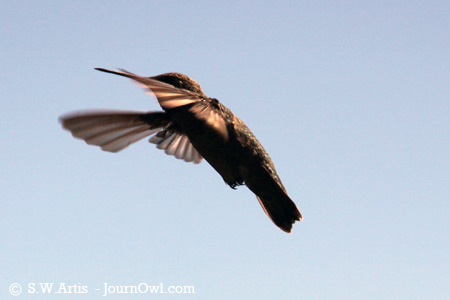 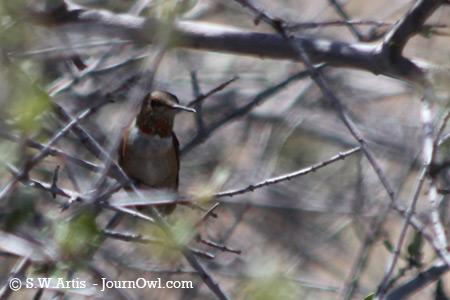 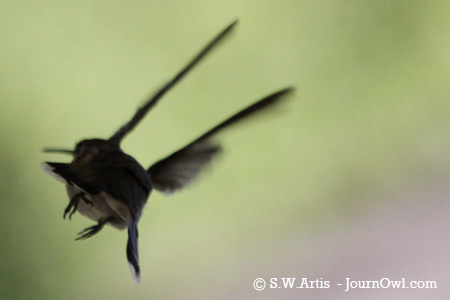 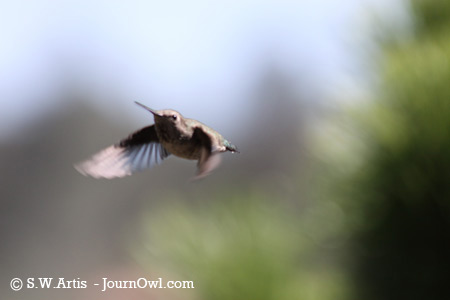