While rummaging through the latest research in Conservation Biology, I came across a publication that caught my attention.   It’s not that the title conveyed a trinket of enlightenment nor promised to do so as I wound my way from introduction to methods to discussion.  In fact, the title evoked an emotional response that was the exact opposite of astonishment.  And by that I merely mean I could (or assumed I could) foresee the results, which is practically a staple in the ocean conservation world when discussing the effects of a burgeoning coastal human population on neighboring marine ecosystems.  In that context, is there anything else that should pop to mind other than overfishing and declining fisheries? 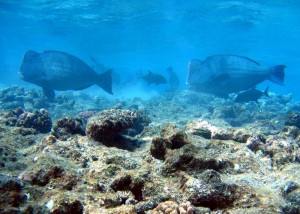 With the pages rolling it becomes quite apparent that there are a few conservation gems sprinkled throughout the paper and worthy of rehashing, or what a waste of my time in writing and yours in reading this post.   Success of marine protected areas, declining species, and the interconnectedness of species in an ecosystem are the themes/take home messages while the family Scaridae is the star, or victims, of the show. 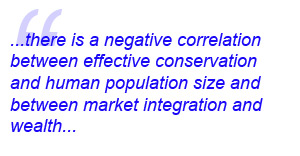 Scarids, or parrotfish, included 83 species at the time of my university courses (~90 species as of 2002) and are so named because their fused teeth resemble a parrot-like beak.  And it is this beak that is quite useful for biting off pieces of coral and algal fronds.  The bits are ground down in their massive pharyngeal mills and the algal cells are extracted.  As discussed by the authors, parrotfish fill a critical role in maintaining coral reef systems by controlling filamentous algae and Scleractinian corals, removing detritus, and digging through the surface of the reef thusly redistributing the ground calcareous pieces as sediment.

As Pacific Island populations grow, the demand for coral reef resources including the parrotfishes themselves increases dramatically.  Thus, it is not surprising that the fishing pressures have caused a total parrotfish population decline of 45% from 2004 to 2005 in the Pacific Island study area. But remember I said there were a few conservation gems…well it turns out communities in the Western Solomon Islands have begun to see the frightening trends and instituted management practices and community-based marine protected areas to curb the overfishing (and habitat degradation) problem.  Not only are their livelihoods on the line but the whole coral reef system.

The take home lesson is that community-based marine protected areas do in fact work, and is evident with the following results:

-Parrotfish numbers/abundance in outside sites were significantly lower than inside community-based marine protected areas (CBMPA) for each size category.

-Large effects between inside and outside CBMPAs were evident in each size category.

-Combined, these findings reinforce the stark difference in abundance across fish size categories between inside and outside the CBMPAs of villages with customary management and an urbanized center. 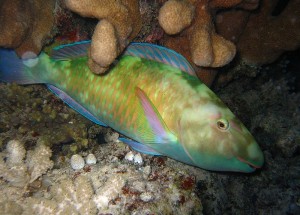 We now have yet another piece of evidence highlighting the need for marine protected areas to ensure healthy fish populations and coral reefs, as well as a need to conserve for the future health of a growing human population.  However, instilling good ocean management practices is not and an idea we can afford to treat with procrastination.  According to the authors, “There is a negative correlation between effective conservation and human population size (beyond a threshold of more than 1000 people) and between market integration and wealth, which suggests that as rural communities urbanize and monetize in Melanesia, their capacity to conserve resources weakens.”

And this negative correlation is perhaps the most interesting finding and something that sounds quite familiar.  As populations grow and become more economically viable they effectively lose their ecological self-control and ocean husbandry suffers.

So is this humankind’s innate progression as we become less reliant on the natural course of the environment and aim to control it?  I have definitely seen this trend before…Have you?