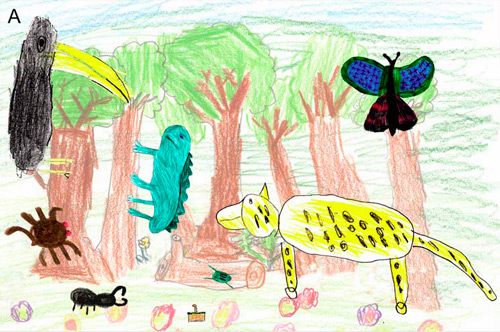 It’s not a new topic and in fact it is one that I recently discussed in “A Silent Mass Extinction”.  I also doubt that I’m treading on novel ground by incorporating spiders, centipedes, insects, invertebrates, bugs, or whatever you prefer to use as an everyday descriptive term, in my definition of wildlife.  I guess to make things simple, wildlife is the Animal Kingdom no matter the taxa; at least as far as I’m concerned when picking appropriate subjects for this blog.

So why the disclaimer?  Well, in the throes of a rather innocuous business conference call my mind was wandering through the sphere of scientific publications and I discovered yet another report that highlighted the lack of attention given to our invertebrate brethren.  Which as I have stated before is both surprising since insects are the majority  of animal species (estimated between 2.5 and 10 million species) and not surprising because of their overall deficiency in the cuteness factor.  As opposed to repeating  the number of insects in jeopardy of extinction, the researchers explored a unique approach that involved…crayons.

We have all heard the songs, quips, and philosophies that tell us children are tomorrow’s leaders, our hope for conservation, our future, and our world.   And all of that is based on the fact that childhood experiences can influence lifelong perceptions.

“Children’s perceptions of animals and the natural environment can be diverse, although their ideas are based around isolated facts and misconceptions are common.  Forest habitats and definitions of the environment are usually characterized as wild places and a habitat for animals.”

“Familiarity and aesthetics are important factors governing children’s connections with animals, exemplified by the popularity of mammals and birds. Of all animals, invertebrates are least understood…” 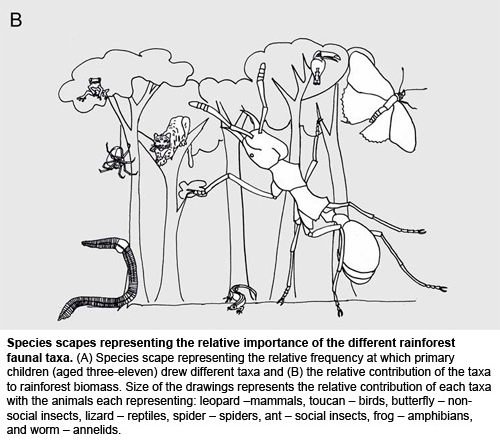 “Despite children’s awareness of rainforest biodiversity, several taxa, particularly social insects, insects and annelids, are still under-represented compared to their contribution to rainforest biomass and global biodiversity. Such a finding supports previous studies, and may be driven by a variety of factors. Two likely explanations for this are that children are more aware of larger taxa or that children prefer larger taxa. An additional factor in the latter point could be that children drew larger taxa because they felt that this would give them a better chance of winning the competition (perhaps because they deem them to be prettier). Either of these explanations reveals that children’s perceptions focus on mammals and birds and undervalues the true importance of invertebrates.”