HomeEcosystemsSaguaro National Park: My whirlwind encounter with desert birds and the West's...
Ecosystems 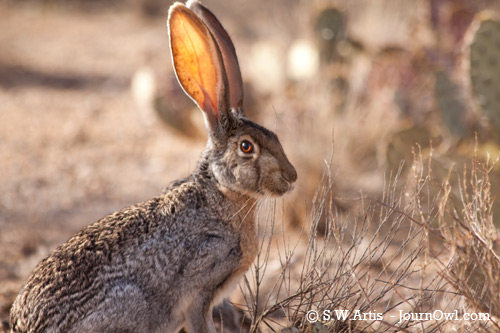 There’s a scene in the classic Chevy Chase comedy National Lampoon’s Vacation in which the Griswold’s spend a few brief moments soaking up the incredible vastness of the Grand Canyon before continuing on with an ill-fated journey.  Although not quite to that extent, my visit to the Saguaro National Park was nothing more than an instant when compared to the time I could have spent wandering into the Sonoran Desert.  But with the 2.5 hours I did have available before the sun set and the park closed, I managed to maximize my time, complete an 8-mile paved vehicle loop with numerous stops and walk 2 miles into a world that redefines the classic sense of the term desert.  This was an ecosystem full of life and to a nature lover a land of nothing but distractions.

On the trail, off the trail, back tracking, walking along empty river beds, stalking the footprints of javelinas, hunting down birds, spying on rabbits, which explains how I only managed to make a 4 mile round trip in my allotted time, and quite thankful that I had the foresight to bring some sneakers.  By the time I returned to my vehicle my tan Dockers and white long-sleeved dress shirt could have persuaded anyone that I had been bludgeoned by dirt clods.

The plant life was amazing, the desert-scape picturesque, and the wildlife kept me wanting more.  Before I gave up pursuit of a few Cactus Wren, I found myself all alone in a eerily quiet world. Perhaps the most notable feature when exiting urban life is the overall lack of everyday noise.  I admit aircraft did make their audible marks at some points, but in general it was completely serene.  And the lack of sound was how I discovered  an Antelope Jackrabbit.  Thinking that the swift moving wrens were back for a potential photo shoot, I peered over some brush to discover the rabbit eating from an Engelman’s prickly pear cactus.  This particular individual appeared rather at ease with my presence, allowed me to approach within 10 feet and permitted my shadowing his/her movements for 15 minutes before I continued my hike.

The antelope jackrabbit is the largest rabbit in the western hemisphere.  They can be distinguished from black-tailed jackrabbits by their larger size, lack of black ear tips, and a broad white patch on their flanks and hindquarters.  The antelope jackrabbit is named so because they dodge predators in a manner similar to that of antelope.  They are relatively uncommon at Saguaro National Park but can be found in large, sandy washes.  Antelope jackrabbits rarely have water available, so they get their moisture from cacti and other plants.  They conserve water by resting in the shade during the hottest hours of the day, restricting activities to the cooler times.  National Park Service 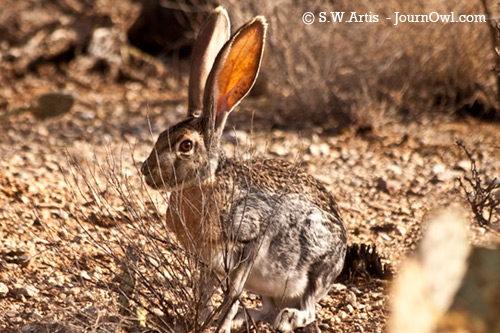 I can only imagine what I could have discovered or encountered had I been able to put in a full day’s exploration.  Well, I never did find the notorious javelinas, but over a 1 hour 45 minute desert walk I managed to check the following off my wildlife checklist: