I can’t believe there’s already a follow up to the last two weeks (Spotlight: Migratory birds; Do you hear what they hear?), but the latest SCB publication provided a unique view on sound and light pollution that I just couldn’t pass.

An evolutionary development to maximize reproductive success has led many reef species to synchronize spawning during certain periods or even a single night of the year. These cues often include cycles of the moon and tides, which signal the perfect opportunity to produce the next generation of fish and invertebrates.

Unfortunately, these celestial indicators are being usurped by artificial lighting around the world. In a new study, A global inventory of coral reef stressors based on satellite observed nighttime lights, researchers have found that spawning and migrating behaviors of reef inhabitants are accidentally triggered by coastal city lights, offshore gas and oil platforms, and fishing boats with high intensity lights. Now, with the flick of a switch we are altering critical lifecycle events that had once been dependent upon light intensity from the sun and moon and were optimized over many eras. Additionally, we are not just affecting highly publicized species such as sea turtles and migratory birds, but an entire ecosystem collectively known as the rainforest of the sea.

And what about sound you ask?  Well to compound the mounting problem of manmade sounds spreading across our oceans from shipping and offshore drilling activities is ocean acidity (Do you hear what they hear?).  Essentially the more carbon dioxide we generate, the more carbon dioxide that is absorbed and dissolved in our oceans. Thus, ocean water becomes more acidic. In 2008, the Geophysical Research Letters published a paper that indicates acidic oceans can amplify underwater sounds and allow them to travel 70% further and hence interfere with the natural acoustics of marine life.

Day or night, when I walk outside it is not nature I hear, but an ever expanding urban environment filled with the sounds of traffic. It is no wonder that researchers are documenting a shift in the way wildlife communicate. Birds are changing their songs, adopting human noises, increasing the volume of vocalization, switching from daytime to nighttime singing, and choosing new frequencies to cope with a humanized planet.  Additionally, some species have abandoned habitats heavily polluted by manmade noise in favor of lower productive areas that are simply quieter. 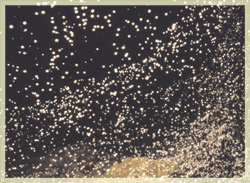 In a loud environment populated with low frequency noise (i.e. traffic), animals are being forced to choose between three doors: Adapt, migrate, or die. Personally, this scenario is not one that I had expected to be encountered based on mere sounds. But when a species that uses low frequency is unable to switch to a higher one, there is little option for them, especially in a time when open spaces are difficult to come by.

When I step outside at night I see a pseudo-day as street lights block the stars and I hear the hum of traffic that masks the crickets and frogs. And then I long for solitude…

What do you hear and see at night?