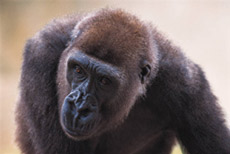 OH FOR THE LOVE OF SCIENCE had a great post concerning the plight of gorillas (Save the Gorillas!) and she brought to my attention that the United Nations has declared 2009 as the year of the gorilla. To (sort of) piggyback on that topic, I wanted to share some stats on the bushmeat trade as it is a great example of why I started this site…to view the world not just ‘By the Numbers’, but ‘Bio the Numbers’.

1 million metric tons – The amount of bushmeat eaten each year in Central Africa and equal to approximately 4 million head of cattle (WWF).

“At least 25% of meat in Nairobi butcheries is bushmeat, sold under the auspices of domestic meat, and a further 19% is a domestic-bushmeat mix, suggesting mixing and cross-contamination during storage or transit” (Born Free, 2004).

As of 2005, up to 30,000 tons of illegal meet was crossing the UK borders from non-European Union countries. And that does not include the shipments that went undetected. (Kümpel, 2005)
The most prevalent form of village hunting is snaring, which accounts for 84% of collections (WCS, 1996)

15% of West and Central African market carcasses are primates, of which 1% is comprised of great apes. Unfortunately, this 1% is detrimental to their survival and represents a significant number of their biomass (Stein et al, 2002b).

Endangered Species International estimates that the bushmeat trade is responsible for the illegal slaughter of 300 gorillas per year in the city of Pointe Noire, Republic of the Congo alone.