“The United States today announced that it will seek the strongest possible management for the conservation of Atlantic bluefin tuna, a fish which is in serious trouble.

This action has two components. 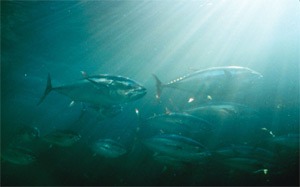 First, we are sending a clear and definitive statement to the international community that the status quo is not acceptable.

In recent years, the countries that fish the eastern stock, which spawns in the Mediterranean, have done so at two to three times the sustainable level, causing a significant and rapid decline in the last decade. The status of the western stock, which spawns in the Gulf of Mexico and is fished primarily off the North American coast, has recently stabilized due to the establishment of well-enforced, science-based quotas.

A sustained lack of science-based management for the eastern Atlantic and Mediterranean stock of bluefin tuna, and concerns about slow recovery in the west, have brought us to this point. As a member in ICCAT, the United States calls for strong and definitive action at the November 2009 meeting in Brazil. This includes establishing management measures that end overfishing such as setting responsible science-based quotas, stronger enforcement of these quotas, and closures during spawning periods.

Second, the United States strongly supports Monaco’s proposal to list Atlantic bluefin tuna under the Convention on International Trade in Endangered Species of Wild Fauna and Flora (CITES) to prohibit international trade of the species. The United States will consider amending or withdrawing support for the Monaco proposal if ICCAT adopts significantly strengthened management and compliance measures.