The Salmon Problem: 10 years and no solution 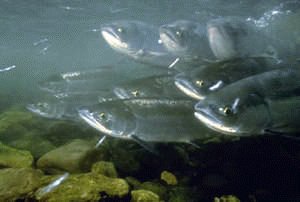 Sometimes I wander around the web (and my mind) hoping for a bit of inspiration. Recently I happened upon a 9 year old paper/report (Upstream) on Pacific Northwest salmon by The National Academy of Sciences that was complemented this morning by an AP news headline proclaiming “Judge raises concerns over Columbia salmon plan.”  In that moment I realized the report was just as relevant today as it was a decade ago.  And that does not reflect well on our ability to turn things around.

I tend to view the term “salmon problem” as a misnomer because it does not adequately describe the gravity of the issue.  Putting linguistic semantics aside, the salmon problem in essence refers to the decline in the numbers of salmon, which was estimated in the report to be less than one tenth of the historical numbers for the Pacific Northwest (Upstream, 1996).  Which as I said before was published and referenced in a report about 10 years ago.  However, the problem is more than the loss of a potential anadromous species, but signifies impending economic hardship for those individuals (and the families they support) who operate fishing vessels for a living.  In fact, the impact salmon have on our society extends well past the local troller as sustainable fisheries support a multitude of companies, employees, and Native American cultures and peoples.  The Committee on Protection and Management of Pacific Northwest Anadromous Salmonids put it best when they said, “The salmon problem is easy to state, hard to analyze, and even more difficult to solve” (Upstream, 1996).

It has become quite apparent that the salmon crisis is the culmination of many factors that include habitat degradation, pollution, introduction of non-native species, introduction of hatchery fish which compete, transmit diseases, and spawn with wild populations resulting in genetic introgression, building of dams, pesticide use, logging, the modification and redirection of waterways for agricultural usage, and lackluster management strategies that began with the arrival of European settlers.  This is demonstrated by the fact that the mid to late 1800s were characterized by an overabundance of industrialized fishing techniques, which caused the depletion of Pacific Northwest salmon catches by as much as 50%, the presence of more than 4000 salmon harvesters, and the existence of 37 canneries that populated the watershed.

Because there are so many reasons for the development of dwindling salmon populations, which are compounded by short sighted policies and decisions that, shall we say, are less than favorable for the achievement of sustainability, it is no wonder that a quick fix or single solution has yet to be discovered.  Each of the contributing parts mentioned above were summed up rather nicely in Upstream when unbridled economic development and the human population explosion were cited as the creator of the widespread declines because of their lack of sufficient attention to salmon and salmon environments (Upstream, 1996). With that said, is it conceivable that a salmon solution can actually be developed?

Before we can explore plausible solutions, I think it is important to point out that the salmon crisis is a problem with society and how we interact with our environment.  In its crudest sense, we are a wanting, exploitive society that is limited on foresight.  Better yet, we ignore the inevitable and typically adopt a lackadaisical approach to natural resource conservation and only address concerns after a major problem as arisen.  Salmon are not the only casualties of such human overindulgences as we are all familiar with need to reestablish American buffalo and bald eagle populations.  Even to this day, attention is given to the plight of whales and headlines abound with stories of the over-harvesting of our ocean’s fisheries. Thus, some fundamental changes are in order. I understand that we cannot very well halt all activities, but we can make better choices.  As stated by David Bayle, “Ultimately we have to live within the health of the natural systems.”

Realizing that we are bound to our environment is not enough to produce a solution, but may lead us in the right direction.  When commenting on the salmon problem and projects designed to maintain the viability of wild salmon runs, James Lichatowich said:

“First, we need to revise our traditional short-term thinking. We need to accept the fact that recovery, at least to the extent that we can achieve it, is going to be a long-term process. Salmon restoration needs real commitment for the long term (Lichatowich, 1994).”

Therefore the basis for a salmon solution lies with the need to make sure the benefits of salmon and habitat recovery is not superseded by the desire to sustain catches, rely on technology, and favor economics.  Successful solutions require time, money, and sound management practices that do not promote separate goals for salmon, fisheries industry, timber, agriculture, water usage, commercial development, residential expansion, and cheap power.

“To bring about real recovery, all the economic interests are going to have to get together and approach restoration from a common perspective (Lichatowich, 1994).”