The icon of wildlife conservation, the Giant Panda, is feeling  the squeeze of habitat fragmentation.  As urbanization encroaches on wildlife corridors, the panda is left with an inability to traverse habitats and find suitable mates.  According to a recent news report citing the World Wildlife Foundation, the lack of available mates is increasing the chances of inbreeding, which may leave the panda population vulnerable to disease and decrease their capacity to reproduce. And that may mean extinction in 2-3 generations.

The case of the giant panda relates to the concept of constraint and tradeoff in evolution because specialization is a byproduct of adaptation.  Over time, natural selection has shaped the panda population to the chosen environment.  In order to capitalize on the available resources, the panda has traded genetic variation and has for all practical purposes permanently lost alleles for long-term success; a success that will continue as long as environmental conditions remain constant. Thus, herein lies the tradeoff and constraint of being specialized. 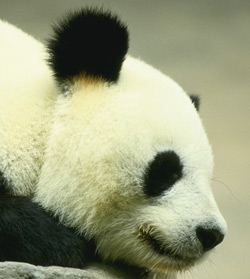 I most certainly believe evolutionary constraints have a hand in the endangered status of the giant panda.  Because the species is a specialized feeder and has a low fecundity, it limits ability to rapidly adapt to fluctuating environmental conditions.  If changes were to occur over a fairly long period of time, sure the panda MAY be able to adapt via the process of natural selection.  However, because alleles and genetic variation have been lost, the species is evolutionarily constrained and unable to adequately cope with the rapid decline in available habitat/resources.  I remember a phrase from some past conservation reading that sums the concept up rather nicely… “What a population was limits what it can be- at least in the short-term.”

And in the irony of expansion, many species with the ability to successfully integrate into urban landscapes  (i.e. coyotes) are deemed as unwanted invaders.   Thus, when fragmentation proliferates and open spaces are lost, it is not only the specialists that are under immediate threat, but even highly adaptable species.