If you have ever driven by a landfill it becomes quite apparent that it is not a biological wasteland.  As tractors move an endless supply of debris about the land, the skies are littered with flocks of birds capitalizing on the smorgasbord of human consumption.  It is disturbing to see wildlife integrate a daily trip to the dump as a means of survival, but the landscape ultimately undergoes a transformation as garbage is covered by earth and grasses.  A seemingly semi-pristine environment now appears on the horizon with the exception of methane burners emerging from the treeless area and representing the only evidence of meddling.

As the flock of gulls migrate with the bulldozers, a host of other species move in to fill the niche.  Not surprisingly, the influx of rodents drives an increase in raptors that utilize the tall methane burners as perches for spotting prey.  A topic that I had not been aware of prior to a recent AP article on May 24, 2009, these landfill methane burners intermittently ignite and are scorching and killing perched hawks and owls. 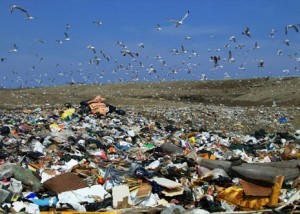 “The methane burners have an igniter which causes a sudden flame flare that can scorch or even kill anything perched on top, flying over, or located inside the stack.”

“Typically, closed landfills are low traffic areas, so only a small percentage of burned raptors are rescued.  It is believed that most injured raptors die due to starvation or predation after burn injuries have been sustained.”

A number of remediation ideas are being discussed by wildlife rehabilitators and conservationists to prevent perching, but what I found interesting, as pointed out by the AP, is that the New York State Association for Solid Waste Management and the Federation of New York Solid Waste Associations have joined forces with the National Audubon Society to help curb the problem.  It is definitely a positive note that I hope is not just limited to lip service but becomes an adopted practice at landfills nationwide.