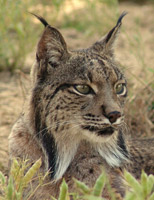 The critically endangered Iberian Lynx is holding on to life in isolated populations in southwestern Spain and Portugal.  According to the IUCN, “There are only two known breeding populations in Spain, and the latest survey results suggest a minimum of 84 and a maximum of 143 adults surviving in two breeding populations. These populations are isolated from one another making them even more vulnerable. There has been a continuing decline due to severe depletion of its primary prey, the European rabbit, by disease and over-hunting, with additional threats of high rates of non-natural lynx mortality and habitat destruction and fragmentation.”

The remaining pocket in Portugal is considered insufficient for continued survival and experts believe this Iberian lynx population is in danger of extinction.