As if H. G. Wells has put pen to paper once again in an attempt to modernize his classic tale about moving between different points in time, I found myself putting one foot in front of another in a world reminiscent of the 80s and 90s.  I thought random shootings and lead poisonings were incidents limited to  days gone by but sadly California condor number 286 will be spending future springs in silence.

Number 286 is joining at least another 25 condors that have succumbed to lead poisoning in California and Arizona since 1992.  There has definitely been some headway in protectionism against lead’s infiltration into our environment, but lead bullet bans in California’s condor habitats, National Park Service lands, and voluntary efforts in Arizona have not eradicated the issue.  Of course most of these efforts occurred relatively recently, but I am left wondering if such partial bans are actually a long-term solution or should we call for a nationwide prohibition on the use of lead projectiles?

Drawing parallels, the 1991 U.S. Fish and Wildlife Service’s nationwide ban on the use of lead shot for waterfowl hunting has been quite successful.  The Illinois Department of Natural Resources in 2000 reported that “the ban prevented the lead poisoning deaths of approximately 1.4 million ducks in the 1997 fall flight of 90 million ducks.”

According to the AP, ” California’s ban appears to have helped immediately. Federal information the state fish and game commission will consider next month shows that 59 percent of condors and two of five nestlings sampled in California tested high for lead from January to June 2008, compared with 45 percent from July to December.” 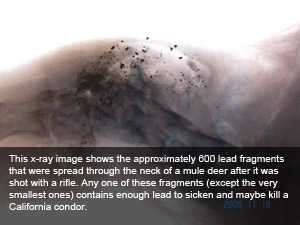 But within the same breath it is disclosed that species considered pests, such as squirrels and wild pigs,  are felled by the thousands and often by lead bullets.  Ignorance and irresponsibility. And that I believe is the magic bullet theory as carcasses with embedded lead are utilized as food for the condor population.  In the Journal of Conservation Biology publication “Demography of the California Condor: Implications for Reestablishment” in 2000, evidence of lead poisoning in condors pointed to the ingestion of lead bullet fragments from animal carcasses.

It’s not about limiting gun rights and property rights, but simply about the outdoor creed that all conservationists, hunters, and environmentalists can stand behind to protect ecosystems, wildlife and endangered species:  “Leave the wilderness, campsite, lake, beach, etc. cleaner than you found it.”

Getting back to ignorance and irresponsibility, I still haven’t addressed the fact that condor number 286 had been shot.  Besides the non-lethal 15 pellets that veterinarians found in his torso and wings, a second condor suffering from lead poisoning was also found to have embedded birdshot this year. I’m utterly speechless…taking potshots at condors only lends credence to the notion that the public is truly an ass!

So as we progress through time towards 2010 and beyond, will the oral legends of Native Americans, which hold this largest flying land bird in North America as sacred, become a tale of what should have been done (a eulogy), or a tale of incredible success that rescued condors from extinction.