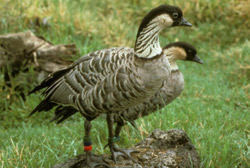 More than 33% of federally listed bird species occur on the Hawaiian islands.

71 Hawaiian bird species have become extinct since the arrival of humans.

An additional 10 birds are feared extinct as they have not been observed for over 40 years.

Prior to human inhabitants, Hawaii was home to 113 unique bird species such as flightless geese, ibis, rails, and 59 species of Hawaiian honeycreepers.

43% of 157 sea and land species are not native to the islands, while 69% of the landbirds have been brought over from all parts of the world.

“Since 1979, approximately 30,000 Newell’s Shearwaters, a threatened species, have collided with utility lines and structures or have been grounded after becoming confused by bright lights.”