Who cares about insects? Aren’t they just agricultural pests, household nuisances, and harborers of disease?  I surely hope that is simply an attempt at exaggeration or at best an antiquated notion.  Insects are vital to ecosystem management and fill important environmental roles as pollinators, decomposers parasites, herbivores, predators, and prey.  Additionally, as approximately 50% of insects are herbivorous they aid in supporting higher food chain levels and accelerate carbon and nitrogen cycles. Yet, the potential for multi-species extinction gets little press in the shadows of the cute and cuddly.  And I’m not pointing any fingers because this is just a matter of fact and I’m guilty of it as well.

“In fact, in the last 600 years, the extinction of only 70 insect species has been recorded, a strikingly low  figure compared with the number of recorded extinctions for vertebrates.”

So when I happened upon a publication foretelling of rampant insect doom as a result of (you guessed it) habitat loss, I just had to spread it around.  In this particular study the author focused efforts on monophagous insects, which are those that depend on a single plant species for survival, in 34 biodiversity hotspots.  These worldwide hotspots  have been identified as conservation priorities, have at least 1500 endemic plant species, and have been the victim of habitat loss resulting in the disappearance of 70% or more of its original vegetation.  Because monophagous insects rely on a single plant species, they are most vulnerable to the effects of habitat 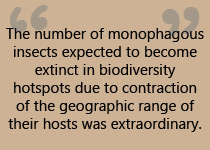 degradation and loss.  The hotspots contain over 150,000 endemic plants and it is estimated that they support between 5.3 and 10.7 monophagous insect species per plant species.

“Monophagous insects are particularly susceptible to habitat loss because to survive without their hosts they would need to exhibit improbable evolutionary host shifts.”

If we are to assume that the insects will be unable to undergo an “improbable evolutionary host shift” ahead of the pace of plant and habitat loss currently exhibited in the hotspots, then extinction of these resources will be inevitable. And that is precisely what the author found after applying a species–area relationship (SAR) model, which is and has been used to predict decreases in species diversity with reductions in the geographic area of plants.

And the outcome of all that data, described as conservative results, is a total of 213,830 insects in danger of extinction if trends continue.

“The estimated range of 213,830–547,500 species extinctions is three to four orders of magnitude higher than the 70 insect species known to have become extinct globally in modern times, despite the fact that the model was intentionally fed with very conservative parameters. On average my results showed that one monophagous species became extinct when 37–94 square kilometers of habitat was lost.”

It’s so easy to forget that there is more to habitat loss than the disappearance of high profile mammals and birds, but an array of plants and hundreds of thousands of insect species we desperately need.